The University of Oldenburg launched a project about plastic pollution in the southern North Sea. In 2019, a workshop with stakeholders was held to analyse the potential influence of stakeholder groups on the marine plastic pollution as well as to discuss solutions to minimize pollution.

The WSF with its network of stakeholders is going to cooperate with the University of Oldenburg to support the project and beyond.

Meanwhile the project has ended. Please read the final report: 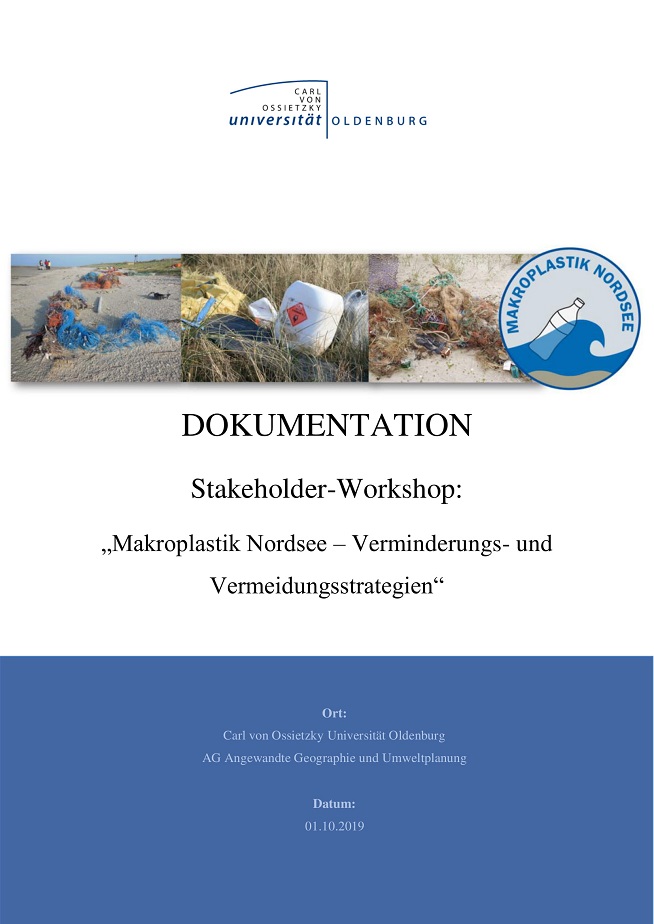 Please find below more information about the project:

The pollution of our oceans with persistent plastic debris has become a global and increasing environmental concern with far-ranging effects on marine ecosystems, which will ultimately affect human mankind. The coastline and beaches of the Wadden Sea are particularly affected, with the North Sea being one of the busiest seas worldwide with 25% of global ship movements. Since 2016, an interdisciplinary consortium at the Carl von Ossietzky University in Oldenburg has been funded by the Lower Saxony Ministry for Science and Culture in order to provide solid, scientific knowledge of the sources, pathways and accumulation zones of plastic litter in the Southern North Sea. This team consists of physical oceanographers, geoecologists, biologists and environmental planners.

Using simple wooden drifters and high resolution, numerical modelling, the consortium researches the dispersal of floating macroplastics (i.e. visible plastic fragments and objects) and accumulation areas within the German Bight and the Wadden Sea. The selected models will also enable backtracking of particles, thereby identifying the main regional sources, e.g. shipping lanes, rivers, tourism. Furthermore, coastal sensors and observation systems are employed to gather data of hydrodynamic parameters. A concept for monitoring and analysing litter data along the North Sea coast will also be devised with a particular focus placed on litter entry via the rivers. In addition, the general public can actively participate in the collection of litter data via a web-based registration system for reporting the wooden drifters. Overall, the consortium will provide sound, scientific data on the level of plastic pollution along the Lower Saxony coastline and in the German Bight, and aims to develop plans for abatement strategies.

The goal of work package 4 is to better understand the socio-behavioural patterns of polluters and to develop abatement strategies together with key stakeholders from the region. For this purpose, we have first carried out a stakeholder analysis differentiating different stakeholder groups and their potential influence on the marine plastic pollution. Roughly, we have differentiated between land-based and sea-based polluters. Land-based polluters are beach tourists, campers, visitors of festivals and other events, industries along the coast and tributaries, and the general public. Sea-based polluters are the fishing industry, harbour and shipping industry, offshore platforms, and sea-based tourism (e.g. water sports). These stakeholder groups and their behaviour have been further analysed through surveys and in-depth interviews.

In a next step, we would like to transfer the results of these studies into solid proposals for mitigation and abatement strategies. Preferably, we would like to discuss these proposals with key stakeholders in a workshop setting, so that we can together evaluate the urgency, acceptance and feasibility of each mitigation and abatement strategy. The workshop results shall be used to formulate concrete policy recommendations targeted and communicated to the national government (e.g. via Runder Tisch Meeresmüll), to the government of lower Saxony (contracting authority) and relevant interest groups such as municipalities, tourism, fishery, industry etc.

The Wadden Sea Forum with its focus on advancing the sustainable development of the trilateral Wadden Sea Region with stakeholders from Denmark, Germany and the Netherlands would be an ideal partner to organize such a stakeholder workshop. The Wadden Sea Forum could use its existing network and information channels to distribute the invitation to the workshop and to communicate its results afterwards. The University of Oldenburg prepares the contents of the workshop, including an introduction to the topic, the results of the Macroplastics research project so far, and proposals for mitigation and abatement strategies with a well thought-through workshop format. The University of Oldenburg is also responsible for documenting the results of the workshop, which can be used for communication purposes afterwards. We are currently targeting for a stakeholder workshop in the second half of 2019, around September / October. While such a stakeholder workshop would be a great achievement at the end of the Macroplastics research project, we also see it as a stepping stone for a potential follow-up research project. Current ideas for such a follow-up are to have a broader geographical focus, including Denmark, Germany and the Netherlands, and to go into more depth regarding the participatory and transnational development of mitigation and abatement strategies.