Networking on
Sustainable Shipping and Ports

at the Forum for the trilateral Wadden Sea Region

At present, the WSF revive the networking on sustainable shipping and ports at the World Heritage Wadden Sea. In the past years, different activities were conducted in the Trilateral Wadden Sea Cooperation (TWSC) with respect to revive the shipping issue. The loss of containers in 2019 by the container vessel MSC Zoe indicated a far-reaching event not only for the natural environment but also for the request and concerns of making shipping more safe in and around the World Heritage Wadden Sea. First step in 2020 was that the WSF with the support of the Wadden Sea Board (WSB) as political body of the TWSC tries to organise a Trilateral Round Table on shipping safety. It was envisaged to elaborate on advices about how shipping safety in the southern North Sea could be improved, considering the vulnerability of the Wadden Sea ecosystem, distinguished as World Heritage site. Several attempts for the conduction of the Trilateral Round Table failed due to different reasons. Therefore, the respective organisations and institutions are following a different way. 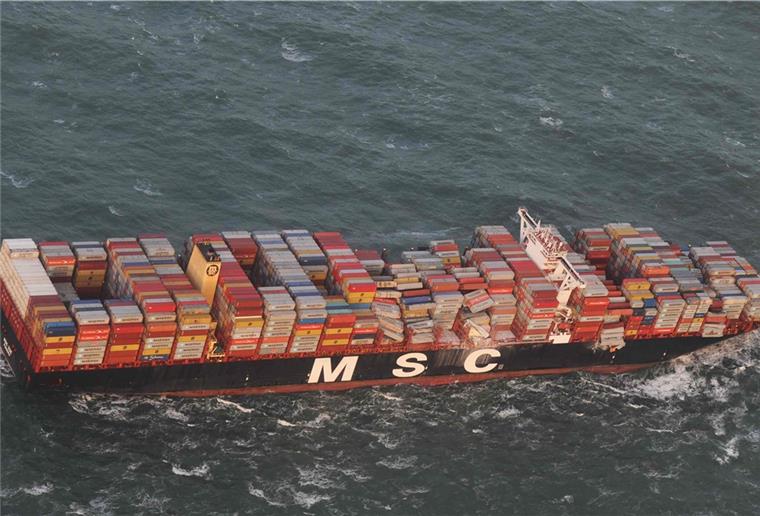 Many parts and pieces already exist, some have to be re-vitalised, whilst others have to be newly invented. To name only a few, for example risk management in vessel traffic [e.g. density of vessel traffic (see e.g. dlr.de/Sar-Ozeanog_Bild1.jpg) and their potential for incidents (see e.g. bsu-bund.de/Jahresberichte)], monitoring of ambient noise in the North Sea (northsearegion.eu/jomopans), on green shipping (see e.g. greenshipping-niedersachsen.de) or on green ports (see e.g. greenport.com). This very short list indicates several items vibrating around or having very strong interrelations with the topic of “shipping and ports”. The WSF decided within its working units to work on a “Green Coastal Deal” for the Wadden Sea Region. Thus, “shipping and ports” is a very crucial topic.

The sectors of shipping and ports are important businesses along the Wadden Sea coast, which contribute to socio-economic welfare of the Wadden Sea Region and beyond. For a healthy future, these sectors are facing the necessity of improvements in their sustainability and environmental footprint, also to reach wide acceptance as (still) growing economic sector. Being more specific: more than 5,000 participants at the DNV online conference on “Fuel of the Future” in January 2022 indicated that the notion of climate change and the shared responsibility of the shipping sector (including the entire supply chain) to reduce and minimise e.g. GHG emissions is high on their agenda. Therefore selected Wadden Sea Ports contribute to taking on their responsibility by taking part in the Ecoports and further sustainability certifications, and implementing the associated duties. There are also improvements of shipping safety in order to reduce the risk of marine pollution. The question is, how can we build upon these developments and what adaptation is possible?

Shipping continues to be a source of risk for the Wadden Sea area. There are recent incidents like accidents, near collisions and the loss of cargo (recent example was the loss of more than 330 containers by the MSC Zoe in January 2019) as well as future offshore developments associated with the need for energy transition and increasing vessel traffic. Ports have effects on the ecological system, for instance by dredging and dumping. At the same time, the inscription of the Wadden Sea area as World Heritage site and as PSSA in 2002 requires new attention and awareness. Hence, by signing a Letter of Intent in 2018 the Wadden Seaports show the willingness to reduce the impact they have on the environment.

National and regional governments, the green NGO’s in the Wadden Sea area ("Wadden Sea Team", WST) as well as the Forum for the trilateral Wadden Sea Region ("Wadden Sea Forum", WSF) with its stakeholders perceive rising concerns of the society in the Wadden Sea Region about potential negative impacts and risks. For example, the National Park Advisory Board in Lower Saxony experienced in their membership an increasing concern and requested to take action on improvements within the shipping business. This was seconded by the resolution of the National Park curatorships of Nordfriesland and Dithmarschen in Schleswig-Holstein.

Over the past 100 years many activities for the improvement of shipping safety and the reduction of pollution caused by ship traffic, for example, have been developed and implemented on European and international level. A timeline of existing conventions and agreements as parts of law of the sea (mainly encouraged by major accidents, e.g. EU Erika-Packages) is shown in Annex 5.2 of the "Report on Sustainable shipping and ports at the Wadden Sea - a WSB 35 Information" (see down below). Thus, the development of the law of the sea integrates general aspects for shipping as well as specific environmental aspects, and installs different communication and discussion platforms as well as decision-making bodies on European and international level (e.g. IMO).

The current developments linked to the topic of energy transition will pose new challenges to the coast and the ports. Increased traffic is anticipated in order to install the required off-shore wind parks and the landing of cables and pipelines as well as the approach of hydrogen bulk carriers in Wadden Sea ports.

These requirements, challenges and problems indicate that an intense and comprehensive stakeholder involvement is necessary in order to find and implement sustainable and viable solutions also to consider the natural environment such as the World Heritage Wadden Sea.

The general aim of this entire approach is to establish a trustful, constructive and productive environment for the different sector such as shipping, ports and green NGO’s with respect of exchanges and discussions on the developments in the World Heritage Wadden Sea.

The following text provides an overview how the WSF is willing to achieve this aim.

In Lower Saxony, a core group of the WSF is currently working on conducting a meeting of Regional Round Table concerning the issue of shipping. The Trilateral Round Table was postponed several times due to different reasons, therefore, within the below mentioned project funded by the DBU, a core group decided to start a new approach on a new level.

The result of the Regional Round Table “Sustainable Shipping at the Lower Saxon Wadden Sea” will be presented here. 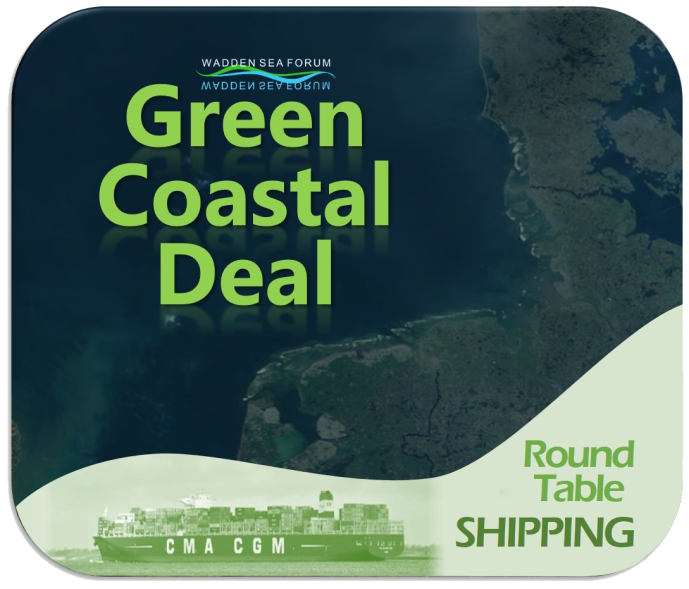 Our Projects and activities

Two projects regarding SHIPPING - funded by DBU and WSB

In order to work on specific declaration points of the Leeuwarden Declaration (2018), the Wadden Sea Team (WST) proposed to conduct a project on shipping and ports in the Wadden Sea area. In 2020, the WST submitted the first draft to the WSB31 and, finally, after a long journey two shipping projects were approved. The original WST proposal was split into two parts with different funding sources. In total more than fifteen organisations are working together in both projects, in different roles. Joint meetings of both project teams and partners ensure good cooperation and synergies. The partnership of both projects ranges from the nature and environmental NGO’s in the Wadden Sea Region to representatives of the Wadden Sea ports (NL, D and DK) and further port authorities (e.g. Wilhelmshaven, Bremen) as well as the Maritime Police Inspection of Lower Saxony and the Wadden Sea Forum as an organisation.

Sustainable shipping and ports at the Wadden Sea funded by DBU

The larger project part on shipping and ports (abbreviated German project name: "Zukunftsfähige Schifffahrt im trilateralen Wattenmeer") is funded by the DBU (Deutsche Bundesstiftung Umwelt) and is mainly working on the establishment of a long lasting and sustainable dialogue platform integrating the shipping sector as well as the Wadden Sea ports. In order to achieve the main goals of this project, it is divided into four work packages: WP1 – shipping, WP2 – harbours, WP3 – dialogue, WP 4 – scientific assessment and advice. The main part of the investigations concentrate on the questions, e.g. which dialogue formats are already in place, what are the lessons learnt and what is missing as well as what are open issues to be discussed. This project started in November 2021 and had its kick-off meeting in January 2022.

WSB: Sharing and developing knowledge to strengthen the contribution of shipping to a well-protected Wadden Sea World Heritage

The smaller project part entitled “Sharing and developing knowledge to strengthen the contribution of shipping to a well-protected Wadden Sea World Heritage” funded by the WSB is dealing with: a) the compilation of best practises and existing information on the recent activities with regard to sustainable development of the ports and Wadden Sea island ferries, b) the development of scenarios for evaluating existing and recommending new Associated Protective Measures for the Wadden Sea PSSA, c) facilitating dialogue amongst ferry operators and other relevant stakeholders regarding nature-friendly ferries in the Wadden Sea and d) safeguarding and discussing progress from the lessons learnt of the MSC Zoe incident. This project started in August 2021. First interim results have been reported to the WSB recently. More information (Link to BUND website - will follow soon)

Initiative on siltation of small harbours

Initiative on siltation of small harbours along the Wadden Sea

The Small Harbours Initiative for smaller harbours around the Wadden Seas Region and in the tidal rivers, which are suffering mostly on their accessibility due to sedimentation and siltation. Some of these harbours are on the edge of a bigger estuary some are located within the Wadden Sea. The idea is to establish a working group to develop long-lasting strategies on how to sustain the characteristics of these smaller harbours for their surrounded area such as regional and coastal identity and maritime emotions in the respective area. This item will contribute the goal of the EU Green Deal: transformation into a sustainable and “resilient” future of WSR communities.

With regard to siltation of small harbours in tidal rivers a first meeting took place in Brake at 21 March 2022. (see video and newspaper articles here). Approx. 30 participants from different sailing and motor boat associations attended this meeting and informed about their challenges and problems with regard to accessibility and the limitation of their leisure time facilities. This initiative is supported by the Trilateral Wadden Sea Sailing Association (TWSSA): https://www.soltwaters.de/t/twssa.

Currently, a survey is done with respect to retrieve specific information on existing marinas and their characteristics.

The main project aim is (citation): "The Wadden Sea World Heritage Site deserves and needs special protection - also as an area for recreational activities. This will only succeed if climate change is limited in all areas.
The WATTfossilfrei project also aims to support the use of alternative propulsion systems for engines in small-scale shipping as well as for motor and sailing yachts. This will reduce not only CO2 emissions but also other air pollutants, underwater noise and potential oil spills in the Wadden Sea. Our goal is for recreational and small-scale shipping in the Wadden Sea World Heritage Site to take on a pioneering role in climate and environmental protection on a supra-regional scale in conjunction with the local port and tourism industry." 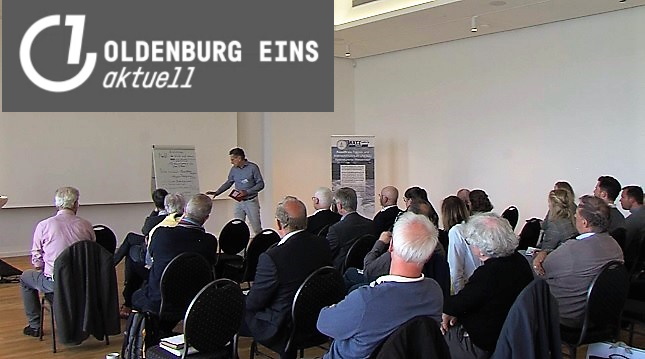 Concluding, the report displays that more items have to be tackled than solely “shipping safety”. The WSB mandate to the WSF focusses on “shipping safety”. The variety of stakeholders (governmental and non-governmental) show a variety of expectations, interests and positions according to the broader topic of “shipping and ports”. The report shortly elaborated on those diverse aspects. It shows clearly that concentrating on “shipping safety” comes off second best. Further aspects have to be taken into account and to be dealt with in the TWSC sphere. Different approaches are “en route” (such as a Single Integrated Management Plan (SIMP), the Wadden Sea Team (WST) proposal), but a cohesive strategy is missing. Therefore, the WSF suggests that the Lower Saxon Wadden Sea National Park Authority lobbies for the establishment of a network “shipping and ports” based on existing structures and approaches.

At WSB 35, the Wadden Sea Forum and the Wadden Sea Team informed the WSB about the status and the progress of the shipping and ports projects. Here you can find the report dated from February 2022.

Dear reader, you are invited to get involved into this process. Please, contact us.